The title of this post refers to a tune my Mother-in-law used to sing to my son.

In this case, I was actually going somewhere. I baked this cake to take and share at our family Christmas dinner.

After kicking myself over this memory lapse, we ate it when we got home. (Which wasn’t such a bad thing, either.)

I took a couple photos before we ate it, but do wish I’d taken photos during the baking process. Next time for sure…

In any case, I’d like to share the recipe. It’s somewhat based on a recipe of my Mother’s that I found in an old cookbook of hers from 1959, called ‘Nellie Lyle Pattinson’s Canadian Cook Book’, by the Ryerson Press.

The recipe is called ‘Orange Cake’, but I put my own twist on the recipe and turned it into a ‘Lemon Cardamom Cake’.

With no oranges at home, I subbed it with lemons instead, and added cardamom too, which blends perfectly with citrus.

Without further ado, here you go!

In addition to that, I slathered on some store bought whip cream, then added some blueberries and raspberries. It gave it a nice colour! Then some confectioner’s sugar sifted on top. Yum!

If you decide to make it, I’d love to hear how it turns out. Happy baking! ~ Karen

Tonight marks the beginning of longer days and shorter nights. That’s something to celebrate!

In fact, the winter solstice has been one of the most significant times of the year in many cultures around the world, and for thousands of years.

Marked by festivals and rituals, it’s the symbolic death and rebirth of the Sun.

Think of Father Time, who is the perfect metaphor for this seasonal event.

I don’t have anything quite as glamorous as Stonehenge to offer here, but that said, here in the Haliburton Highlands, (we do have lots of beautiful rock, in the form of the Canadian Shield), along with some of the most dazzling sunsets and scenic views in the world.

So, throw a Yule log on the fire and have fun celebrating this magical time of year.

Widely grown as an ornamental plant for its attractive and slightly scented flowers, the musk mallow blooms throughout the summer.

Several cultivars have been selected for variation in flower colour, including the one shown here from my garden, ‘Rosea’, with its dark pink flowers.  The cultivar ‘Alba’ (white flowered) earned the Royal Horticultural Society’s Award of Garden Merit.

Though not native to North America, (more Eastern European/Central Asia), I consider it an heirloom plant because it’s been in cultivation for a long time, as you can see from the hand-coloured botanical engraving below from the 1700’s.

Pretty colour, lovely scent, drought tolerant, and the bees love them… The musk mallow ticks all the right boxes when I’m choosing flowers for my garden! 🙂

Deer have played a significant role in folklore and mythology, in partnership with cultures around the world, and throughout most of our known human existence.

Many European cultures equated deer with woodland deities, including Greece. Artemis, the Greek goddess of wilderness played the role of virgin huntress. One time, a man named Actaeon witnessed Artemis bathing nude in a pool. She transformed him into a stag and his own hounds tore him to pieces. Talk about revenge! 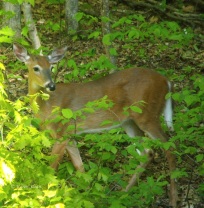 The Iron Age Celts also have stories of people and deities who took the form of deer. Finn mac Cumhail, leader of Ireland’s heroic band, the legendary Fianna, was out hunting, and his hounds cornered a beautiful white deer, but they refused his order to attack. That night, Finn was visited by the goddess Sadhbh who explained how she was that deer, under a magic spell from which the only chance of her release would come about by his declaration of love for her. A beautiful story, but a tragic tale.

Moving on to the 6th century, Saint Gregory of Tours wrote chronicles of the Merovingian rulers. His Historia Francorum contained a legend concerning King Clovis I, who prayed to Christ in one of his campaigns so they could find a place to cross the river Vienne. Considered as sign from the divine, a huge deer appeared to the king’s army and showed them where they could cross the river, and that’s (supposedly) what they did.

Deer appear in art from Paleolithic cave paintings , and they have played a role in mythology, religion, and literature throughout history, as well as in heraldry.

Their economic importance includes the use of their meat as venison, their skins as soft, strong buckskin, and their antlers as tools, including handles for knives. Deer hunting has been a popular activity since at least the middle Ages. 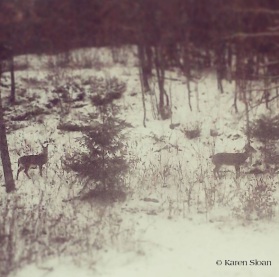 According to the many different interpretations of deer as animal messengers, including totem animals from the Native American traditions, a deer represents gentleness and suggests the use of kindness in each of our endeavours.

In addition to that, if a deer crosses your path, you are likely a compassionate person who gives and receives unconditional love.

In any case, it’s always wonderful to witness a visit from the deer, and to know what depth of their nature is revealed to us and included within each encounter.

Why does the first snowfall of the year always seem magical? 🙂

The snow had begun in the gloaming,
And busily all the night
Had been heaping field and highway
With a silence deep and white.

Lemon lilies are a magnet for butterflies. 😍 #summer #pollinators #butterfly #ontario
Lovely to see a large snapping #turtle today. 🐢 (Chelydra serpentina) Saddens me that these magnificent, prehistoric looking creatures are listed as a species of special concern here in Canada. 😞 #ontario #wildlife #turtles #speciesatrisk #reptiles #snappingturtle #MyHaliburtonHighlands #freshwater #cottagelife 🐾
My wee #fox friend. One of three kits who greet me each morning. 🐾 #ontario #wildlife #furbaby #neighbours #animals #instapic #MyHaliburtonHighlands
Enjoying the lilacs while they last. They smell divine! #Lilacs #scent #aromatherapy #flowers #instapic #flowersofinstagram #purple #realmccoy #vintage #cutflowers 💜🍃
Also known as 'flags', the Iris #flower takes its name from the Greek Goddess #Iris, which also happens to be the Greek word for 'rainbow'.🌈 Likely the most familiar irises are these bearded types, (Iris germanica). Irises are not true #bulbs, but rhizomes, which can be divided every few years, around mid to late August. 🌞 Next to the purple & blue varieties, yellow is a personal favorite. 💙💜💛 #flowersofinstagram #yellow #blooming #spring #flower #springtime #perennial #gardening #myth #folklore 🍃 #MyHaliburtonHighlands #ontario
The lovely #Allium hollandicum, aka Purple Sensation, planted amongst hardy #perennial plants like Hostas, will help to hide any fading leaves. 🍃 One of the most popular allium #bulbs, it's perfect for planting in drifts among other #ornamental grasses & perennial #plants. 🌱 Added bonus -》They multiply every year, #pollinators love them, & they're #deer resistant, too! 🐾 🐝 #flowersofinstagram #blooms #purple

I love it when people share, but please ask before using any of my photos, artwork, or original content on your site. I’ll likely say yes if you link back to me here. Thank you! ~ Karen