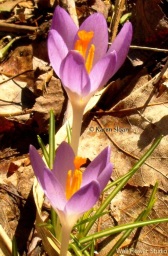 n the first day of Spring my thoughts always lead me to the garden.

One of the first flowers to greet me after a long winter is the lovely Crocus.

With petal colours varying from white, purple, yellow, and even striped, this small perennial bulb, (corm), planted in autumn for its spring show, originates from the Alps, and offers abundant blossoms that brighten up the beds, often while other parts of the my garden are still heavily laden with snow.

Ancient legend relates Crocus as an unfortunate lover. The myth centres around his unfulfilled and tragic love for Smilax, a woodland nymph, also transformed but in her case, as a brambly vine. His sorrow it is said, awakened sympathy from the gods who aided his metamorphosis into what we now know as this dainty spring flower.

According to old lists containing flower meanings, the Crocus flower is equated to both ‘Spring’ and ‘cheerfulness’. And why not after a long, dreary winter?! Both meanings seem quite appropriate!

Out from the heart of the Crocus,
There leaped to my heart a song,
It was as though an angel
Had borne the word along,
And its message drew and held me,
Until my soul was strong. 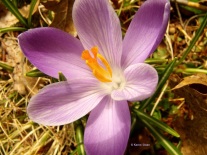 Saffron, the stigma from Crocus sativus is a very expensive spice. Along with being a food additive, it scents perfumes, cosmetics, and is a component of traditional medicines. Studies show it works as an anti-carcinogentic, boosts the immune system, and is an antioxidant. 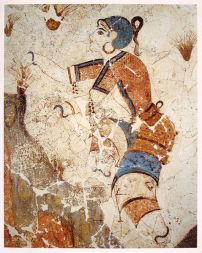 Shown on frescoes dating from 1700 B.C., it’s no wonder this flower has been cultivated and harvested since ancient times in the Middle East, North Africa, India, and throughout the Mediterranean region.

In any case, with three feet of snow still to melt in my neck of the woods, I’ll think of this flower, and others, biding my time until I get to enjoy their presence once again.