You don’t have to be Irish to know a four-leaf clover is a universal symbol of good luck. This accepted belief is as old as the hills.

A description from 1869 states “four-leaf clovers were gathered at night-time during the full moon by sorceresses, who mixed it with other ingredients, while young girls in search of a token of perfect happiness made quest of the plant by day”

Druids held four-leaf clovers in high esteem. They too considered them a sign of good luck.  As much as I love to read about, and devour any information on these mystical figures, I do take some of it with a grain of salt.

The sad reality is, we just don’t know much about Druids. Except for information written by the likes of Julius Caesar, Tacitus, and Strabo, who as Roman conquerors, and Druids being their enemy, any account from them is likely to be biased.

There are however, many Irish myths and legends pertaining to Druids which may hold historic value and even factual events. But I digress…

Irish folklore tells us finding a clover with four leaves will bring you good luck, however finding a stem with five leaves or more will not bring you more luck.

I’d have to disagree with that. The odds would have to be pretty high for someone to find one, so I’d consider it even more fortunate, indeed!

Each of the four leaves has its own representation, though this varies depending on who you speak with about it. Generally, the most popular meanings are:

By the same token, a clover with three leaves has symbolism, too. According to Pliny, it’s connected to the Holy Trinity. In addition, clover was used to make a salve against snake bites, since snakes represented Original Sin, and encouraged by that dastardly serpent in the Garden of Eden. Here, each leaf represents a good deed. In this case:

Clover shoots up easily, even after repeated mowing. It produces nutritious crop for livestock and fixes nitrogen in the soil, which reduces the need for synthetic fertilizer. It grows in all kinds of climates, and it’s a great addition to your compost bin.

Last but not least, it’s one of the earliest plants to produce flowers, making it an important source of nectar for our pollinators, especially bees.

Of interest to floral historians, the Four-Leaf Clover in floral language means – ‘Be Mine’. 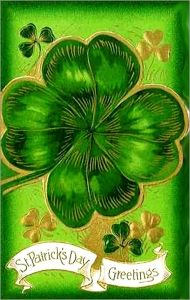 Several years ago, I was lucky enough to find a four-leaf clover. I pressed it between the pages of a book, and since then its sat, on one of the bookshelves in my house. Now that I’m writing this post, I’ll have to search for it.

I figure it doesn’t matter if you find the same one twice! When it turns up, it will still be a lucky find.

Top o’ the mornin’ to ya. Make sure to wear something green! 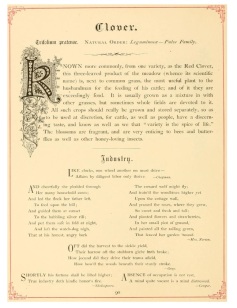