The idea of a triple deity or triad of goddesses has fascinated me for as long as I can remember.

Three is my favourite number, so I started to research a little bit about the number three and its connection to mythology, or more particularly, triple deities.

Triple deities appear throughout every layer of history, back to the very beginning of our current knowledge of ancient mythology, across cultural divides, from the Indus to Ireland.

Along with the number three, my fascination lies in the connections between them, from the ancient past and up to the nearer present.

A definition from Wikipedia:

A triple deity (sometimes referred to as threefold, Trinity, tripled, triplicate, tripartite, triune or triadic) is a deity associated with the number three. 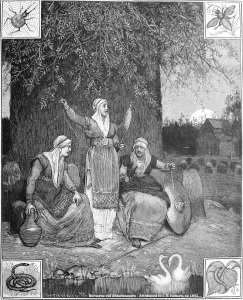 Obviously, three-fold deities usually appear in three forms, however many of them acquired individual names and appearances of their own but were worshipped together in a group or as one single entity.

For example, a triad can correlate in some way with life, death, and rebirth, (or), birth, life, and death, but all are encompassed under one umbrella name.

Some examples from classical mythology and religious iconography who best represent these triads are: the Greek Moirai,  the Charities, the Furies, and the Norse Norns. The Irish Morrigan also appears, but sometimes as one being, and at other times as three sisters, or even as crows.

There are a couple of single deities who consist of these three aspects such as the Greek Hecate who is often depicted in art with three faces, the most common interpretation is that her first face is the Maiden, the second the Mother, and the third is the Crone.

Sometimes Hecate is represented by the moon’s aspect of a waxing, full, and waning moon.

The Roman Diana is shown on the coin as a triple goddess.

In Norse mythology, the Norns spin the threads of fate. One can find them sitting at the foot of Yggdrasil, the tree of the world.

From the Poetic Edda we’re told: “Thence come the maidens mighty in wisdom, Three from the dwelling down ‘neath the tree.” 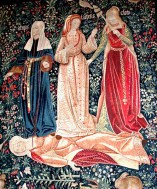 There are the three Greek Fates, Clotho, Lachesis & Atropos, who spin, draw out, & cut the thread of life. 🪡 🧵✂️

The Fates were the personifications of our life and destiny. They decide our life, lifespan, and its end. They control our past, present, and future. Sometimes they appear at our birth and choose our destiny at that point.

The Horae are personifications of nature in each seasonal aspect. 🌸

Ovid writes in his Metamorphoses about the Horae:

Orestes at Delphi, flanked by Athena, Pylades, & the Erinyes c. 330 BC.

It’s said the Furies, also known as the Erinyes, sprang forth from the spilled blood of Uranus when he was castrated by his son Cronus.

An oath in the Iliad invokes them as “the Erinyes, that under earth take vengeance on men, whosoever hath sworn a false oath” – One would not want to swear an oath invoking the Furies, only to break it at one’s peril!

In addition to all of the above three deity info, Carl Jung recognized that numbers are “symbols of the Self’s coming to consciousness.” He felt the first four numbers in particular symbolize different “phases of the journey of the Self, different expressions of its transformation, and considered the arrangement of deities into triplets an archetype of religion.”

In any case, I’ll be writing more about myths, archetypes and fairy tales here on my blog. It’s good to be back here again after a several month hiatus. 🙂

In the meantime I’ve been writing my book, practicing self-care, and doing some much needed work around our house, all creative ways to take my mind off of plagues, war, and other horrible happenings we’re all faced with these days.

In light of that, I’d just like sign off saying that I stand with Ukraine. I do hope & wish, like everyone, a positive conclusion to the unprovoked Russian aggression they’re currently faced with.

Wishing everyone happier days ahead. – Thanks, Karen

2 thoughts on “The Power of Three in #Mythology”