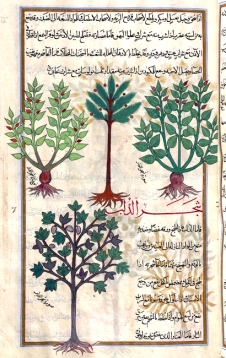 There’s an old Valentine’s Day custom that was anxiously awaited by potential would-be lovers each year. It took place on the eve of February 14th, and this harmless process of divination incorporated bay leaves as a way to dream of one’s future beloved.

Described in a newspaper article, a late 16th century periodical called the Connoisseur, it went something like this:

“Last Friday was Valentine’s Day, and the night previous I got five bay-leaves, and pinned four of them to the four corners of my pillows, and the fifth to the middle; and then, if I dreamt of my sweetheart, I was told that we should be married before the year was out.”

I’m not sure if that practice was ever successful, but I don’t think it would hurt to give it a try if one is seeking a suitable mate. 🙂 I imagine one’s pillow would smell nice at the very least, and it would be easy to purchase bay leaves at the grocery store in order to give it a try!

On the flipside, the story of Daphne and Apollo, introduced to us in Ovid’s Metamorphosis, bay leaves, or a tree really, is used as a method for escaping the pursuit of love (lust is more likely), instead.

In this tale, perpetual virgin Daphne, the river nymph, while pursued by Apollo, the Greek sun god (who could be considered a stalker and one who wouldn’t take no for an answer) was transformed in to such a tree to escape his clutches, and not a moment too soon, either!

Daphne’s metamorphosis into a laurel tree may have been a form of escape from Apollo, but he later crafted a wreath out of her laurel branches, keeping her within his grasp afterall.

Michael Drayton, in his “Muses’ Elysium,” heralds the Bay leaf like this:
“The garland long ago was worn As Time pleased to bestow it:
The laurel only to adorn The conqueror and the poet.”

In any case, love isn’t always a bed of roses, back then or now. Sometimes it’s a bed of bay leaves. 😉

2 thoughts on “Valentine’s Day herbs – Divination for the pursuit of love, and for escaping love, too.”